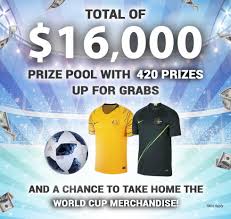 It’s one of the things that we look forward every 4 years, not by just soccer fanatics but everyone! All soccer fans and admirers of the sport out there won’t want to miss taking part in our exciting upcoming Casino Race. This year, Emu Casino are celebrating the World Cup mania with you! All you need to do is to play during the promotion period, 11 June 2018 to 15 July 2018, during which time a total prize pool of $16,000 up for grabs. That’s not all! Top 10 players will be taking home one of our World Cup merchandises! So lace up your soccer shoes and get ready to show them how it’s done because World Cup mania is upon us!

Play any Pokie game (excluding Jackpots) to participate in this Campaign.

The biggest Soccer event in the world is now underway and Aussies and the Rest of the World are on their feet. We here at EmuCasino aren’t missing out the action, and we certainly wouldn’t want you to miss out on it as well. We will be providing you with a quick guide so you can catch up on the latest happenings this year in one of the most waited soccer events with ongoing commentary from our resident experts. Not only will we be following all the World Cup highlights but staying in true Aussie patriotism, we’ll be following Team Socceroos as well.

Just in case you’re wondering how you can escalate your excitement this Soccer season, don’t worry, we’re way ahead of you. This soccer season we present our players with the Soccer World Cup 2018 Casino Race Campaign. Along with following the world cup and cheering on for your favourite soccer team, players also have a chance to win some cash and official FIFA World Cup Merchandise by participating in our Casino Race. Players opt-in automatically and there’s a total of $16,000 in store, so go to our Casino Race Page now to see where you stand, or click here for more details.

Socceroos at the 2018 World Cup: How Will They Do?

Expectations are low for Australia going into the 2018 World Cup.

The Socceroos struggled through the longest World Cup qualification campaign of their history, being edged out of the automatic spots by Japan and Saudi Arabia, and needing play-offs against Syria and Honduras to assure them of their place.

Coach Ange Postecoglou resigned after the play-off win over Honduras, and Dutchman Bert van Marwijk will take charge in Russia before being replaced by Graham Arnold after the tournament.

So what does Van Marwijk have to work with? While this squad has some talent, they are well below the ‘golden generation’ that reached the second round in 2006.

There are no Harry Kewells or Mark Vidukas to speak of any more, but there is talent in the likes of Aaron Mooy who sets the tempo and Tom Rogic who brings that X-factor to the team.

Mile Jedinak is a reliable defensive midfielder with an excellent record from the penalty spot, while Mathew Leckie is a speedy presence on the right who will be one of the players charged with providing delivery to target man Tomi Juric.

Australia will look to defend in numbers, with the likes of ball playing centre-backs Trent Sainsbury and Mark Milligan expected to be tested more for their ability to withstand pressure than their distribution.

Group C pits Australia alongside France, Denmark and Peru in a group they are rank outsiders to qualify from. Expect France to come out on top and Denmark and Peru to fight for second place.

How we’ll be following the progress

Our team of experts will be closely following the Australian National Team, along with pre and post match reviews on both the Socceroos and the major highlights of the World Cup. We’ll also be providing some insight on the results and will be following the matches in and out, right up until a team lifts the Trophy!

You can find all the news articles and match reports below.